Maidenhead United came from behind to beat play-off chasers Solihull Moors 3-1 at York Road on Saturday, courtesy of a Sam Barratt hat-trick.

It proved to be a stalemate first half, but when Stephen Gleeson netted from the spot on 49 minutes, it looked like the Magpies’ impressive league run was nearing an end.

However, Barratt clinched an equaliser seven minutes later to end Solihull’s run of five games without conceding a goal in all competitions.

The returning favourite wasn’t done there though as he became the league’s top scorer by beating Ryan Boot from the spot twice in the final 10 minutes.

Barratt now has seven goals to his name as he continues to impress in his first season back in tier five.

Despite another great game for Alan Devonshire’s side, they will be without James Comley at Chesterfield as the midfielder received his marching orders with three minutes remaining after picking up two yellows.

The win lifted the Magpies into the play-off places as they leapfrogged Solihull into fourth spot, entering a two-week break off the back of four consecutive league victories.

The result proved to be the Rebels’ second victory of the season, inflicting revenge on the opposition who knocked them out of the Emirates FA Cup last weekend.

Slough left it late though as the deciding goal was put on hold until the first minute of stoppage time after former Maidenhead man Max Worsfold netted from a free-kick.

Cam McGilp opened the scoring for the hosts on 84 minutes, beating the ‘keeper from close range to give the hosts lift-off.

However, the opener was quickly cancelled out as Donovan Wilson popped up to rustle the bottom corner for Bath with four minutes remaining.

The opening minute of stoppage time saw Slough steal all three points thanks to Worsfold, who smashed home a free-kick from the edge of the box.

Hungerford Town were aiming to return to winning ways this weekend after falling to a 3-2 defeat away at Ebbsfleet United in their last league outing.

The Crusaders faced another tough opposition in Dorking Wanderers this time around, but came out on top, winning 2-0 at Bulpit Lane.

Hungerford were dealt a blow just before the half-hour markthough as Matt Partridge saw red after an off-the-ball incident.

However, smiles were back on Crusaders faces on 50 minutes after Ryan Seager broke the dead-lock for the hosts, heading home the opener.

The three points were sealed late on as the former Southampton forward completed his brace, netting from the spot after Luke Hopper was brought down in the box.

Hungerford remain unbeaten on home turf this season and sit one point behind leaders Dartford going into next weekend’s trip to Braintree Town. 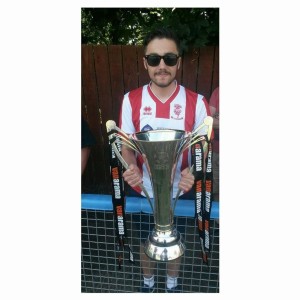